Near Washington Hospital On Mowry Ave 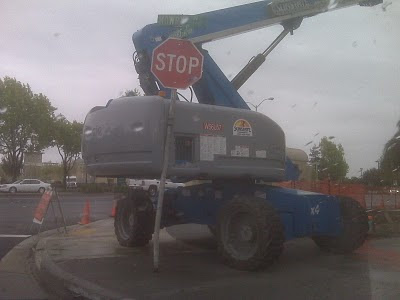 There is an awful lot of new construction going on in Fremont near Washington Hospital on Mowry Ave. The hospital itself is under somewhat of a facelift just north of the main building. Furthermore, BART has undergone a massive project not near Washington Hospital on Mowry Ave but off of Stevenson, just across from the Fremont Police Station. Apparently BART is digging the tunnel for the new line. In addition, there is one building in particular that I pass by every day on my way to my office here http://tricityhome.com/fremont-office-visit.html. You may know it. It is on the corner of Stivers and Mowry, a brand new medical building.

I'm sure there must be some harried individual or two, being that workers are getting pressure to meet deadlines. The image above was taken one morning right on the corner of Stivers and Mowry-near Washington Hospital on Mowry Ave. Blinded by the rear of the lift device, a worker unknowingly moved the boom over and bent the stop sign a bit. Being that it was right there near Washington Hospital on Mowry Ave, it must have received a bit of attention. Perhaps he crane/boom/lift operator is now pushing a broom inside the building instead of operating the lift device.

I have not been by again yet at the time of writing this blog, but I am wondering if they discovered it after the fact then used the lift to try to straighten it back again. Regardless, it may never look the same. By Jeff Pereyda