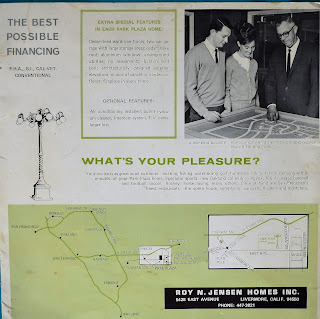 Roy N. Jensen built a lot of homes in Livermore in the late sixties. There is even a street named after Mr. Jensen right off East Avenue just East of Livermore High School. Everybody knows the name Jensen in Livermore.  His office was located on East Avenue  and on Tuesday, October 10, 1967, He filed his corporate status with the sate of CA as Roy N. Jensen Homes, Inc. Albeit that his name and subdivisions were and still are well-known. There was a  not so well-known subdivision project Jensen was fond of called Park Plaza Homes. 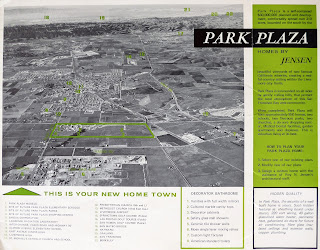 When my wife and family sold our Fremont Townhouse and moved to Livermore in June of 2014, we bought one of the Park Plaza Homes by Jensen. At he time, I only knew that it was way different than the other homes around. I knew it was a custom build, and I also knew I wanted to live in it. So, we bought it, and I am so glad we did.

I now live and work in this neighborhood, and one of my neighbors has hired me to sell their Livermore home http://www.tricityhome.com in Jensen's Park Plaza. I have an affinity for original brochures of homes built some time ago.  I like mid century stuff.  My clients actually have the original brochure for the Park Plaza Homes by Jensen. I took some digital images and thought I would share them with you. 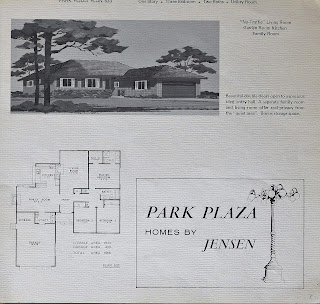 These single story ranch Park Plaza Homes are fortified with 2 x 6 and 2 x 8 rafters throughout, 1 1/8 inch thick subfloors, girder and beam supports and more. They were and still are tanks.

You do not need a Jensen home to be happy in Livermore. Just come to Livermore like I did. Visit www.cometolivermore.com and let me know if there is anything I can do to help with that. I hope you enjoyed the trip down memory lane.
Posted by Unknown at 7:02 AM No comments:

Alameda County Tax records shows that  a client of mine from 1999 sold her Fremont Niles home in 2004 without me as her real estate agent.  I was the real estate agent who helped her buy the Niles Canyon home back in 1999, but we had lost contact after a few missed tries to stay in touch. When I saw that she sold her Niles home in Fremont, I felt bad. Turns out, the tax records are incorrect.

Recently, I received a text to voice line from a Zillow app. Something about selling her house. It was quite jumbled. After some quick digging, I realized it was my long lost client who now needed to sell her home in Niles Fremont.  She must have typed in Jeff Pereyda, real estate agent in google and "pow" there I was, now a real estate broker. She was so glad she found Jeff Pereyda, Real Estate Broker http://www.tricityhome.com, rather effortlessly in fact.

So, after 15 years, she simply googled me. That says something nice about her. I also must have done something right in 1999.

Try this cool google aplet that searches for you. Maybe someone will use it to reconnect with you some day soon.

Posted by Unknown at 8:41 PM No comments: